According to Google, Datally is a data manager app which can save up to 30% data. In an era where telecom companies are offering unlimited data for cheap, does Google Datally deserves a place on your phone? Does the app save data or it’s just a marketing gimmick?

Datally is a lightweight Android app. The size of the application’s APK file is 5 megabytes. The Datally app requires Phone, SMS, and Usage Access permissions to work. Once you provide these three permissions to Datally, you’ll see two buttons on the screen. The “Yes, I agree” button will enroll you in Google’s app improvement program. The other button will take you to the main interface of the app.

Once you enter the main screen, the application will ask you to set up a VPN connection on your phone. Make sure that you enable VPN service. If you don’t do so, the Datally won’t work. Don’t worry! The VPN server won’t track the sites you’ve opened, videos you’ve watched or files you’ve downloaded. 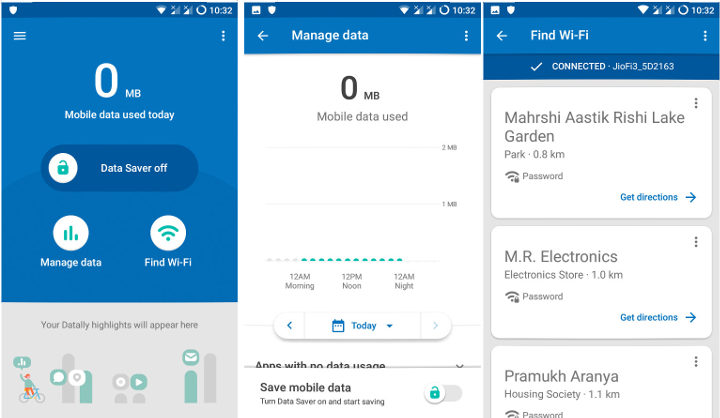 Datally’s main interface is dead simple. It boasts a toggle button to turn on/off the data saver function, a data counter, and the following two options:

Here, you’ll find a report on the amount of data the Google Datally has saved. You can see data savings for the current day, week or entire month.

Datally allows you to see the data used by the apps on your phone. If the applications you don’t use often are downloading/uploading files in the background, you can block them with Google Datally.

The app allows you to find hotspots nearby you. It displays the WiFi hotspots on Google Map. Please be noted that not all hotspots displayed on the map are public.

Datally runs in the background and displays notifications for WiFi networks available near you. You can turn off these notifications from the settings interface of the app.

Does the app work as advertised by Google?

After turning on the Datally’s data saver function, I closed the app and used the phone for 4 to 5 hours.

Although Datally was running in the background, its data counter was not working on my rooted Xiaomi phone. My IP address before and after the VPN connection was established was the same. This indicates that the VPN function of Datally was not working.

The app didn’t save data, but it tracked the data used by other apps. According to Datally, some applications on my device were downloading files in the background. I blocked these apps.

Did I enable the required permissions?

Datally app supports Android 5+ devices only. If you’re using an old device, you can use this app after updating the OS or flashing a new Android ROM. An alternative approach for saving data on Android device is to download and use the data saving browser.

Opera had pulled the plug on its Opera Max data saver and manager app earlier this year. Will Google Datally survive?