You are here: Home / Tools / Best Voice to Text Apps for Android with 100% accuracy

Speech recognition technology is being implemented in many ways. Before the year 2006, it was used only in Robots. Now, you’ll find speech recognition systems in cars, airplanes, etc. SR engines in vehicles are complex and sophisticated.

Traveling by airplane and buying a car is not possible for everyone. But most people on the planet do own a smartphone. Because of the tremendous efforts of Google to keep Android OS the best mobile phone operating system in the world, it is now possible to do things that were impossible when Nokia was the leading mobile phone brand.

Nokia phones had a narrator tool that converted text to speech. Android allows you to do the reverse of this i.e use your voice as input. Android OS features an inbuilt utility for the same. Modern phones running on Android have a speech recognition function built-in. They can use this feature to search on Google, make phone calls, send text messages, emails, etc easily.

Which is the Best Voice to Text app for Android? 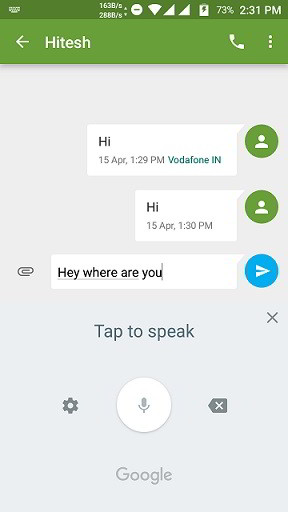 Many people don’t know that Google keyboard comes with a speech to text conversion tool and they waste their time in searching for the best voice to text app.

Google keyboard comes preinstalled on every Android phone and it’s pretty good at recognizing the words you speak. If your phone doesn’t have it, open the play store on your mobile device and download the app.

Apart from its intuitive and smart keyboard, the app includes a powerful tool that converts voice to text. To use this feature, enable cell phone data connection and tap on the Microphone icon which appears on the tap right corner of the keyboard.

The app will now request to speak. Once you begin speaking, the Google keyboard will begin updating the draft message with the words you’ve uttered. If the app has entered an incorrect word, you can easily replace it with another word.

Google Keyboard has the option to block or enable the usage of offensive words. It allows you to select a default voice input language. If you have connected a Bluetooth headset to your phone, you can still use the voice to text feature of Google keyboard by enabling the headset option from the app’s settings panel.

If you’re searching for a standalone app which converts speech to text on Android, go through our below list:

Live Transcribe has been developed by the Google Research Team. The application requires microphone access permission and it translates your speech into text instantly. It detects the sounds nearby you and filters them. For example, if a strong wind is blowing near you, Live Transcribe will remove the wind’s sound.

LT displays the text on the screen as you speak and it provides an option to change the text size. By default, LT won’t save transcriptions on your device. You can configure this application to save transcriptions for up to three days. LT also supports several languages. 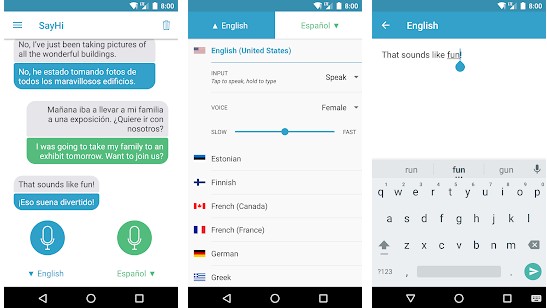 Say Hi is similar to Google Live Transcribe. It not only translates the words you speak in your local language into text but also displays its meaning. Because of this feature, Say Hi is one of the must-have apps for travelers. SH can translate the text you copy to the clipboard. By default, SH converts the speech into the text until you stop talking. You can disable this feature from Say Hi’s settings interface.

Say Hi enables users to select their gender and speaking speed. You’ll not be able to use it unless you enable the “record voice” permissions. The app is ad-free and you’ll have to keep the internet connection on the phone active to use some of its important functions. 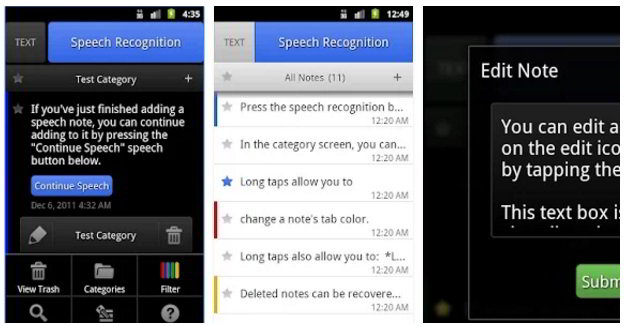 The first thing that you see after running ListNote is a popup that asks you to enable the light or dark theme UI. Once you select a theme, you can begin using the inbuilt voice to text converter tool of ListNote. To do so, tap on the speech recognition button and begin speaking.

ListNote has the option to pause and reset the speech recognition engine. The words the app recognizes will appear in the text area below these two options. Once all the words you’ve spoken have been converted to text, ListNote will save the contents of the text area in the form of a note.

This note can be edited, locked, or shared with your phone contacts and with your friends on social networking apps. 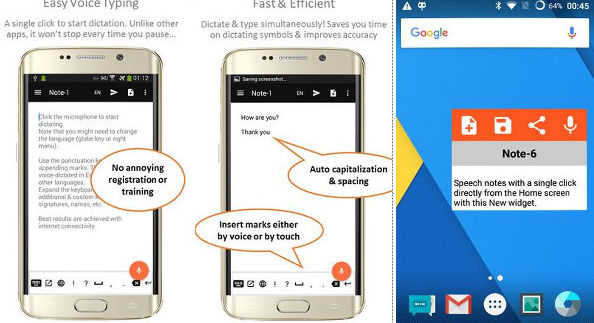 SN is a good alternative to the above applications. It allows you to create notes without typing a word. To use SN, you must install the Google app. This is the only drawback of SpeechNotes. SN provides an option to export the notes to the MicroSD card. It allows you to send notes to other users via email, Bluetooth, etc.

SN has ads and it supports voice commands. It can automatically capitalize the first letter of the 1st word of a new sentence. SN has a built-in punctuation keyboard. To insert punctuation, you can tap on the keyboard key or say the name of the punctuation you want to insert in the note. 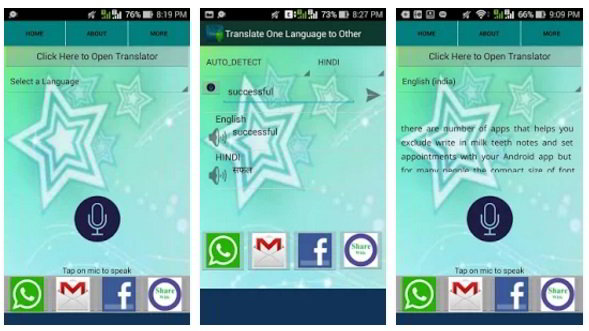 Voice Writer is not popular like ListNote nor does it have a very good UI, but Voice Writer does the job very well. The application uses the Google speech recognition API. Thus, the translation from voice to text will be accurate.

VW also features a translation tool to convert text from one language to another. It has the option to send the output of speech to text converter to a Contact of Gmail, WhatsApp, Facebook, Google Hangouts, or any other messaging app on your phone.

Conclusion: I hope that you’ve found the answer to the question which is the best speech to text app for Android in this article.