If you don’t want to put your original photo on social media sites or messaging apps as the DP, you can either set an image of a celebrity, alphabet, or a caricature as the display picture. You’ll find several images of celebrities on Google but you won’t find your caricature on the web.

Frankly speaking, creating a cartoon from an image with software such as PhotoShop, Gimp, etc require knowledge of advanced features such as layers, edges, filters, etc. If you don’t know the use of these features, you won’t be able to use the software.

Although many applications on the Play Store can make cartoons from photos instantly, most of the applications will generate an ugly cartoon from your picture. The following “photo to cartoon” apps are the best in the business. 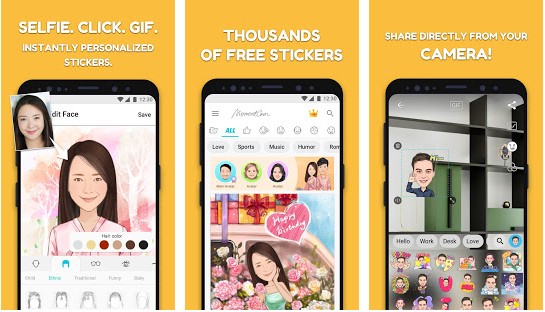 MomentCam takes 66 MB space on the storage memory. Although MC is a large application, it is a great tool to create cartoons from images.

The app lets you create a new avatar or customize an existing avatar. To create a new cartoon, you must allow MomentCam to take pictures with your phone’s camera. Once you tap the shutter icon of the camera, MC will process the image and then, it will create an avatar from the image.

MomentCam lets you change the color of the hair and the frame of the glasses (if you’re wearing spectacles). It allows you to add a mustache/beard to the face and has the option to change the eyebrow style and the facial expression. To make customizations easy, MomentCam saves caricatures automatically and displays them in a beautiful interface.

Once your avatar is ready, you share it with other users by tapping the “share” button. In addition to avatars, MomentCam creates animated stickers. MC supports 10 languages. 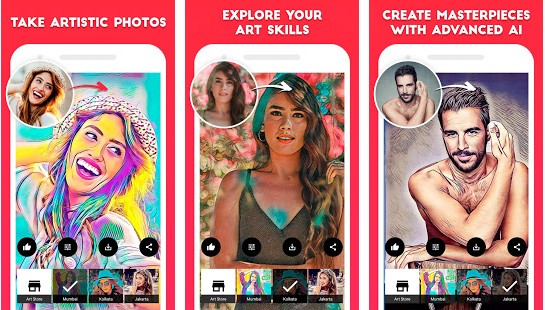 The app displays an ad each time you choose a style. It lets you edit the picture before applying a cartoon effect to it. You can crop the picture, resize/rotate or change its aspect ratio in Artista. The application also enables you to play with the colors of the image.

Artista’s filters are named after cities of various countries. It allows you to download and use filters. Artista lets you save the caricature to the phone’s gallery.

Sketch Camera provides several realtime sketch filters. It lets you apply the filter to the pictures and videos saved on the phone or to the entire scene that is in the front of the phone’s camera. SC can save your sketches to the internal as well as the external storage memory. It supports 15-second videos and has the option to generate high-resolution sketches instead of SD quality sketches. SC offers 15+ filters. You can reorder the filters from its settings interface. 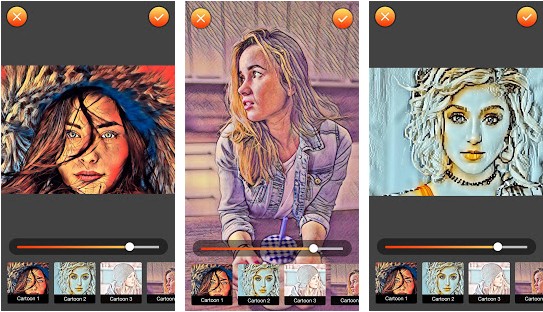 CPE is the smallest application on our list. It has an excellent rating of 4.6 on iTunes and a good rating of 4.0 on the Play Store. CPE can convert your images saved on the MicroSD card or ROM to cartoons. Once you capture an image with the photo, you’ll see a list of effects.

Once you tap on an effect, CPE will apply the filter to the image. The app takes a few seconds to do so but the end result is good. Cartoon Photo Editor adds a watermark to the photos. 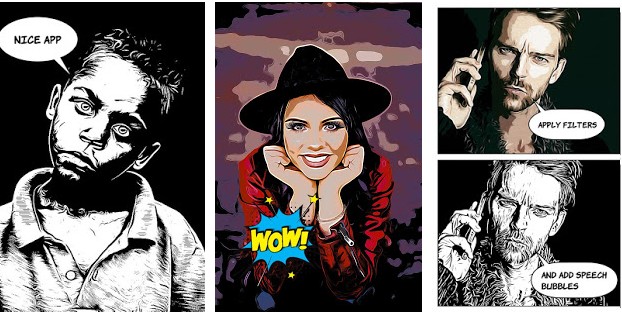 Comica is similar to CPE but it provides fewer filters and more options. It lets you adjust the brightness, contrast, and saturation of the colors in the image. It allows you to add stickers and speech bubbles to the pictures. Comica offers a pencil tool so that you can write on the image. It also provides an eraser utility and an option to change the pen color. 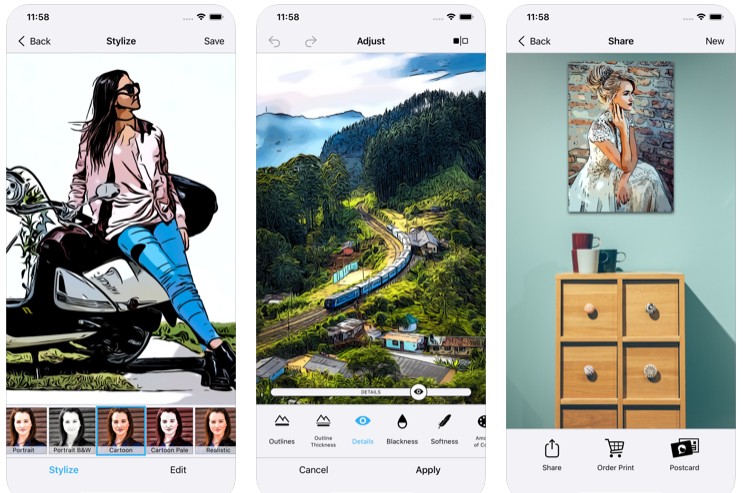 C2C is the highest rated caricature/cartoon photo app on iTunes. It offers over 39 powerful filters that you can apply to videos or still images. Clip2Comic allows users to adjust the brightness of the images. It also lets you crop the pictures. Once C2C transforms your image or video, it displays an option to save the media file to the storage memory.

Clip2Comic enables you to change the appearance of the cartoon with its reshaper tool. It supports four modes and has the option to adjust the blackness or outlines of the imported image. 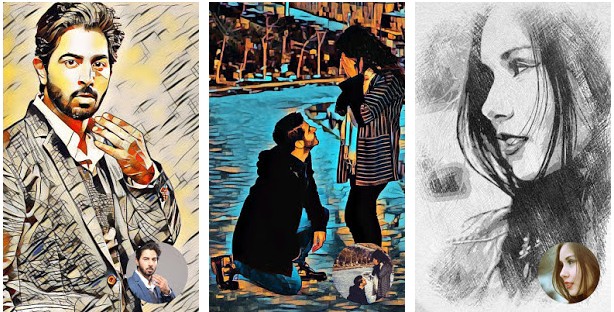 CP is one of the most popular cartoon picture apps on the Play Store. It supports the following three modes and has an album module where you can see the images that CP has saved:

Cartoon Photo: When you tap this option, CP will open its inbuilt gallery that displays pictures saved on your phone. You should select an image from the gallery and select the filter you want to apply.

Deep Art Photo: This feature is similar to the above module. The only difference between the two functions is that you can apply multiple filters to a single image with the “Deep Art Photo” option.

Cartoon Camera: When you tap this option, the Cartoon Pictures app will open its built-in camera module and will show the list of filters it supports in a row. When you tap the filter, CP will apply the filter to the entire scene the phone’s camera has captured.and