Although Android is one of the finest operating systems of all time, its memory management feature is not robust and effective. One of the major problems with Android is that it keeps inactive tasks in the RAM for a long time. Such tasks waste the system memory and page file. As inactive tasks waste RAM, active applications may embarrass users with their performance. Hardware components require power else they’ll not work. If many processes are running in the background, the battery juice will drain fast.

Management of memory is left up to the users. The Android 4.4+ OS allows you to see the list of active apps in the background. It also lets you kill inactive applications by swiping left/right. The problem with this tool is that it doesn’t show the amount of RAM an app uses. Hence, killing an app that uses a minuscule amount of RAM doesn’t make any sense.

For better management of the system memory, we need a powerful Task manager or App killer for Android which gives full details on active processes. Most users have an Android device with 1GB of 2GB RAM. Hence, we should use a Task Killer that takes system memory into account before killing an app. Today, we’ve compiled a list of best apps for managing Android tasks. Download one of the apps we’ve shared below to improve your device performance. 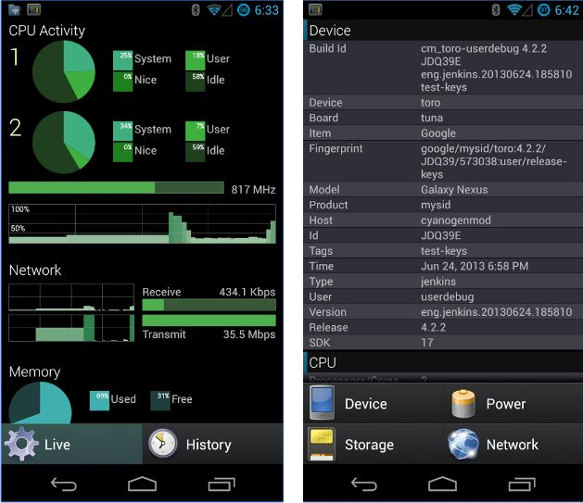 An incredibly small and powerful app killer, SPTM has an advanced interface that shows the information on processes. The application scans the system memory and identifies processes that are active or running in the background. Then, SPTM compiles a list of apps and shows the following details:

When you turn the screen on after the display turns off automatically, the SystemPanelLite Task Manager will refresh the values mentioned above. The SystemPanelLite for Android has a system resource monitoring tool which shows the below information of a mobile device in real-time:

SPTM features a one-click option to kill all tasks. It has a dev info module that shows full information of the hardware components in your phone or tablet. 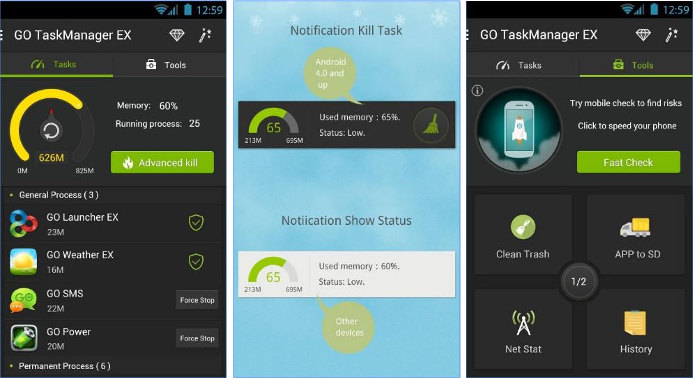 Most Android app killers have an ordinary interface. GTE is among a handful of app killers that provide excellent UI and UX. It has been launched by the developers of the popular Go launcher app for Android.

Apart from killing inactive apps, GTEX lets you remove optimize the Android OS for speed. It allows users to:

The free Go Task Manager for Android provides a general kill button that uses a smart algorithm to boost RAM. It lets you create a list of apps that shouldn’t be force killed. Go TM includes an auto kill module which frees the system memory whenever the screen turns off. You can configure it to alert you whenever the system is running low on system memory. 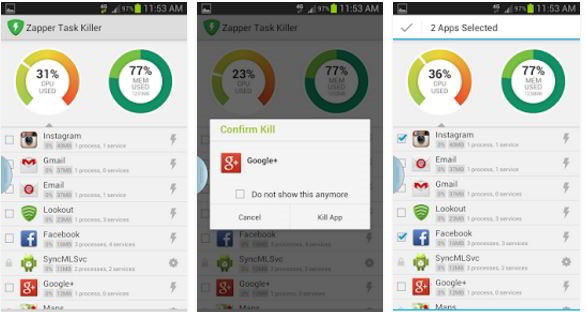 Zapper is the tiniest app on our list. Its APK size is 450 KB. Don’t go by its size, the ZTK works great.

Zapper shows the percentage of memory and CPU used along with a list of apps running in the background. To kill a process, tap on its icon or name from the list and select the kill app option. ZTK lets you sort the list of processes by their CPU and memory usage. It displays the number of child processes and services created by an app along with their RAM usage.

ZTK does a great job of tuning the performance of Android OS. It has the option to refresh the list and select each app on the list. If you use it on a regular basis, you’ll enjoy lag-free gaming and multitasking. 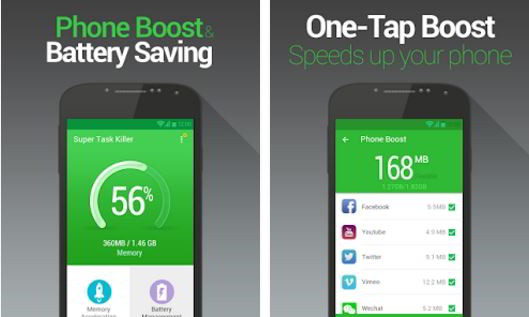 Super Task killer has the following features in addition to phone booster and battery lifesaver: 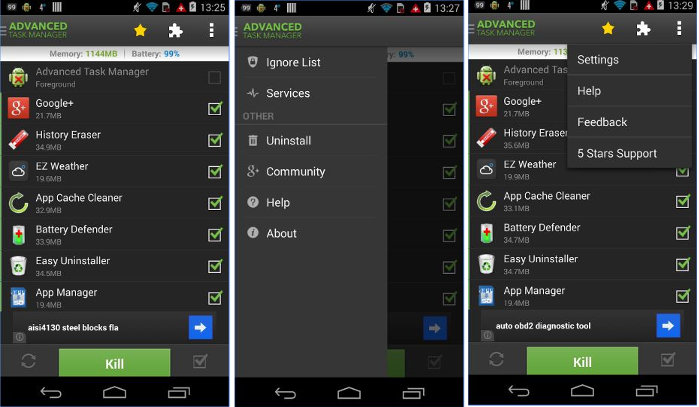 ATM is a free tool that enables you to manage processes created by the system and non-system apps. The Advanced Task Manager keeps an eye on the processor’s performance and utilization. If a process lags because of the non-availability of the processor, ATM will automatically notify you about it.

Android Task Manager for Android has a 1-click tool to kill all processes running in the background. It provides an ignore list where you can add the apps you don’t want ATM to terminate. It features a virus scanner and APK manager to uninstall applications you’ve installed.