People think of replacing their mobile device with another one when they are not happy with the performance of its battery or apps. Let’s talk about the battery, one of the most important components of a phone/tablet. No matter what the mobile OS is, the low capacity or a defective battery is a frustrating problem.

The battery starts draining when you switch on your mobile device. Display, games, and apps are the top three power wasting modules in an Android device. Games require more processing power of the GPU and SoC than normal apps to deliver a good user experience. They also consume a huge amount of RAM.

Apps running in the background may execute some tasks (Ex. Cleaning junk, syncing files, etc). Hence, they’re also responsible for the poor performance of the battery. You cannot use apps or play games on a smartphone without a display. Hence, you can’t fix the “display draining battery” problem on Android.

Apart from Android OS features, games, and apps, people are also liable for the “battery draining problem”. While using a browser, some people open multiple apps at a time and forget to close the tab after using the website. They also forget to turn off the mobile data/WiFi connection before going to bed. These two things can completely drain a fully charged battery of a phone/tablet within 5 to 6 hours.

I’ve shared just a few reasons. There are several other factors that may cause a battery to drain fast. Software/Configuration related issues can be fixed with a good Android battery saver application.

Below, we have shared the list of best battery saver apps for Android. These applications will make your mobile device last longer by killing idle processes, reducing CPU usage, and fixing many other issues automatically. 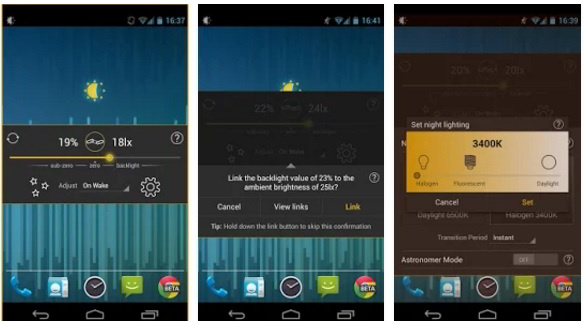 Lux is an app that makes the phone’s display eye-friendly. It adjusts the temperature and the brightness of the screen automatically by detecting the intensity of sunlight. It uses the ambient light sensor of the phone.

Suppose you set the screen brightness to 75 and keep it unchanged. The screen content is easily readable in the daytime if you set the brightness to 40 to 50. Because of the unnecessarily high brightness level, the battery’s power will drain fast. Once you enable Lux Lite, the app will keep the screen’s brightness at an optimal level. It will thus save battery power.

I have used Lux Lite on an old Android phone. The app works like a charm. Lux runs in the background. It consumes a low amount of RAM. Also, it doesn’t waste processor cycles. 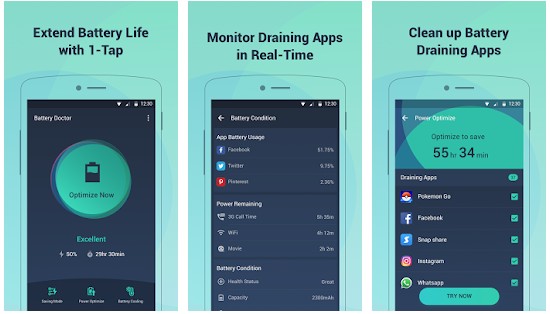 Battery Doctor is the undisputed king of all battery saver apps. It has over 100 million active users. BD is feature-rich and has a beautiful UI.

BD analyzes your handset or tablet to find issues. Once Battery Doctor identifies the problems, it will show options to fix them.

Make sure that you go through the list of services/apps that BD is about to kill. If you fail to do so, you may lose unsaved work.

The free version of Battery Doctor provides a smart charging feature. It has a phone cooler function which reduces the mobile’s temperature by killing active apps of your choice. BD records the battery usage of all active apps in the device. You can check the report of the same in the Monitor section. 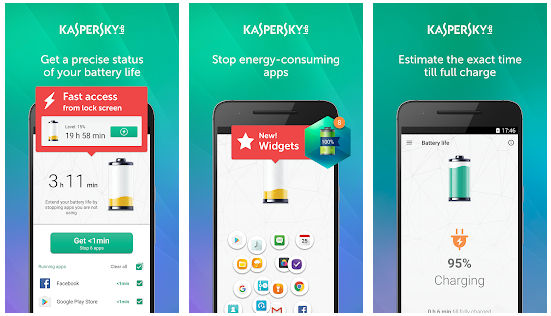 Kaspersky Battery Saver is a tiny app which not only increases the battery life but also boosts RAM by killing inactive processes. It can increase the standby time of an Android tablet or phone by 20 to 30%.

KBS estimates the battery life and displays the same on its main interface. It makes users aware of Android apps that are aggressively consuming the phone’s resources. You can configure KBS to ignore certain apps.

KBS can automatically adjust the screen brightness when the phone is running out of power. It lets users set alerts. Kaspersky’s app can prevent phone overcharging issues by displaying a notification when the battery is fully charged. KBS provides a widget which displays the number of hours/minutes the battery will last and an option to boost the battery life. 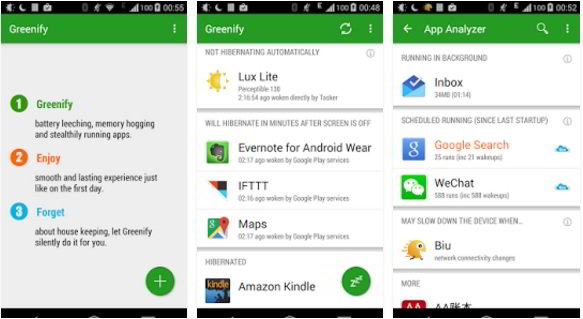 Greenify is a lightweight and effective power-saving application for Android devices. It works on rooted and non-rooted Android handsets and tablets. Greenify ships with a system analyzer tool that automatically identifies apps that may slow down the system during important events.

Once you run Greenify, you will see a list of applications on the screen. You should select apps you want Greenify to hibernate when the phone gets locked. The hibernated processes will resume their tasks when you unlock the device.

Conclusion: Android is a superb operating system. Google releases Android updates on a regular basis but unfortunately, none of the updates have helped users in fixing the battery problem which most users complain. Users have to rely on battery saver applications for the same. If you want to improve battery backup of your phone free of cost, install Battery Doctor, Kaspersky BS, Greenify, or Lux Lite.

Note: Batteries wear out over time. If the phone is old and none of the above applications work for you, replace the battery or flash a new Android ROM.