If you’re at work or school, you won’t be able to access video streaming websites. Companies and schools block access to popular sites intentionally to increase the productivity of the employees or to make students concentrate on their studies. Frankly speaking, YouTube, Hulu are not the only websites through which you can watch TV shows, or live Soccer or Cricket matches for free.

Some TV channels and media companies have launched apps through which you can watch television shows on a mobile device. The applications allow you to watch TV shows of your choice whenever you’re free or bored. Several developers have published video streaming apps on the Google Play Store but the best live TV apps in India among them are mentioned below.

Note: To watch videos seamlessly, the user must use the video streaming applications only when a 3G or 4G connection is active.

Hotstar is a popular Indian live TV app with which you can watch your favorite live sports events and TV serials on a mobile phone for free.

Apart from TV shows, this application lets you watch movies in eight languages. When a cricket match is live, Hotstar will make you aware of the latest scores.

If you’re a big fan of English TV shows such as Game of Thrones, Veep, American Horror story, etc, then you should begin using Hotstar because the application lets users watch top English shows aired in the US, UK, Australia, and other countries.

Hotstar has over 50 million users. It is compatible with Android 4.0 and later operating systems. Although you can use Hotstar for free, if you want to watch premium content/movies, you’ll have to buy one of the two paid subscription plans of Hotstar.

The JioTV application was launched in 2016 by Reliance subsidiary JIO INFOCOMM. Within 20 to 30 months of its launch, JioTV became one of the most popular live TV apps in India.

The live TV app from the Reliance group enables you to watch popular TV shows aired on channels such as Sony TV, Colors, ZEE TV, Set Max, etc for free. It has a user-friendly UI. It gives you access to over 350 channels in various languages and over 55 high-definition channels.

JioTv lets you switch the interface language from English to Hindi, Tamil, etc. It enables you to watch TV shows that were aired in the last 7 days. You can also go through the schedule of your favorite channels with the free JioTV app for Android.

JioTV supports Android 4.1 and higher operating system. It has over 10 million active users.

Airtel TV is a free app with which you can watch 205+ channels on your smartphone or tablet. Unlike Jiotv which is restricted to the users of JIO SIM cards, Airtel TV is available for everyone. To provide a good experience to the users, the application checks the mobile data/WiFi connection speed and sets the video streaming quality automatically.

The app allows you to watch top rated Bollywood/Hollywood movies, trailers of upcoming movies, original content, etc. It lets you pause/resume the live streaming. It has filters, TV guide module, search utility, and an option to create a watchlist/playlist.

Like Jio and Airtel, Idea has launched an app through which users of the Idea SIM card can watch TV shows, movies, popular web series streamed on ZEE5, Hungama, etc on their Android device.  Idea TV supports picture in picture mode. It lets you bookmark the TV shows/movies you’ve watched or would like to re-watch in the future. To stream videos, you must log in to the application with your Idea Cellular account. Users of other telecom operators can only explore the categories or see the list of videos Idea users can watch.

Vodafone Play app’s features and content partners are the same as that of Idea. It claims to give you access to over 15000 movies and 400+ channels. Only Vodafone SIM users can use this application. 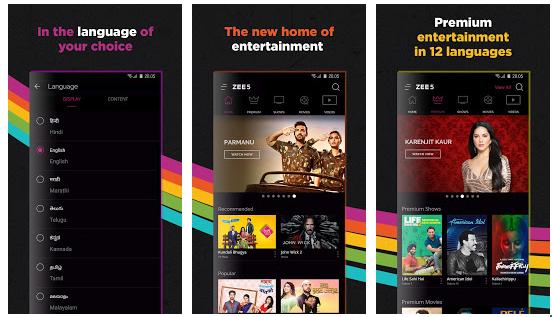 Zee5 requires “location access” permission to work. The app lets you choose your preferred UI language. It enables you to login with your social media accounts and register a new a/c with your mobile number.

Developed and maintained by one of the largest media companies in India i.e. Viacom, Voot has over 5 million users. It is a powerful on-demand video streaming platform that gives users access to TV shows such as Big Boss, Comedy Nights Bachao, Comedy Nights with Kapil, etc for free.

Voot has a large collection of blockbuster movies featuring your favorite artists. Your children will love the app because Voot provides access to popular kids TV shows such as Motu Patlu, Pokemon, Doraemon, etc.

Like other applications we have mentioned above, Voot has a great interface. Voot supports Google Chromecast and it is fully compatible with tablets. It works on mobile devices running on the Android 4.2+ operating system.

Other top apps for watching Indian Live TV shows and movies are YuppTV, DittoTV, OZEE, nexGTv. You can download these four applications from the Google Play Store.

Amazon Prime Video has a good collection of top-grossing or top-rated movies of various genres. It is integrated with IMDB. Hence, you can find other movies featuring your favorite actors, actresses, villains, etc. Prime Video displays a list of actors/actresses that are in the current scene when you tap on the video player’s interface or hover your mouse cursor over it. It allows users to enable subtitles, change the movie language, video quality, etc.

Netflix is a great alternative to the above Indian live TV apps. Once you register an account with Netflix, the application will give you access to thousands of movies and TV shows on your mobile device.

Netflix has the option to find movies or shows by its name. It lets you rate videos. Hence, you can find top-rated movies or shows quickly on the mobile device. Netflix India has very cheap subscription plans.

Conclusion: When you’re at a public place or office, you can easily watch a TV show or live match featuring your favorite team if you install one of the 1st three Indian Live TV apps on your Android device.

If your internet connection is slow, use Android news apps to get live scores and news on your favorite shows.

If you’re searching for an application to watch English content, download and use Amazon Prime or Netflix.

If video streaming sites are blocked in your country or you’re not able to access them at your workplace, you can easily unlock them with Android VPN clients.